I have always had a natural talent for drawing as far back as I can remember.    During my school years, I actively participated in the art shows and won my first ribbon when I was in the third grade, Honorable Mention.    It was quite inspiring at that age.    I continued to enter my work in all art shows that were offered by the schools as well as with outside organizations that worked with the schools to offer their students more public venues.    By the time I had reached the fifth grade, I took a special interest in drawing portraits.    Throughout those years, I had won many awards and ribbons.    At home and school, I experimented with many mediums and techniques on my subjects and found that pencil was my preferred medium.    After I graduated high school, I relocated to Conway and discovered the Fryeburg Fair.

I first started entering my artwork in the Fryeburg Fair Agricultural Exhibition Center in 1990 and won several 1st Place ribbons.    My subject matter at that time mostly consisted of pencil drawings of portraits.    Some years later, I began to experiment with charcoal and have continued using that medium as it is now my preference.    I continued entering my artwork, using the charcoal medium, in the Fryeburg Fair, again focusing on portraits, winning many 1st Place ribbons, as well as other places. 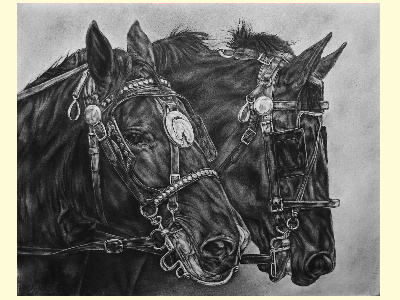 During my visits to the Fair, I photographed hundreds of unsuspecting Fryeburg Fair livestock.    In 2009, I decided to challenge myself for the first time and strayed from my portraits to use some of those photos as my subject.    That year, I entered a collection of three cows in charcoal which took 1st Place and Best in Show.    In 2010, I again entered a collection of three cows and a single entry of a team of draft horses from the Pulling Ring.       Both entries took 1st Place and Best of Show.

In addition to the Fryeburg Fair, I have also participated in the Littleton Art Show exhibit.

This was a bull moose photographed in Allagash, Maine that was presented to me at the Fryeburg Fair last year. 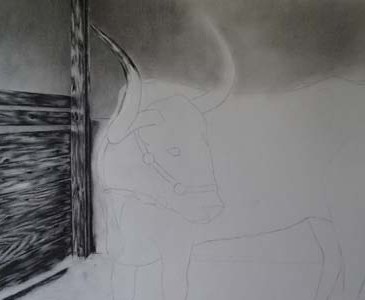 Tony the Texas Longhorn Steer will be finished by the end of this month. He will also be my entry at the Fryeburg Fair Agricultural Exhibition Center this year. 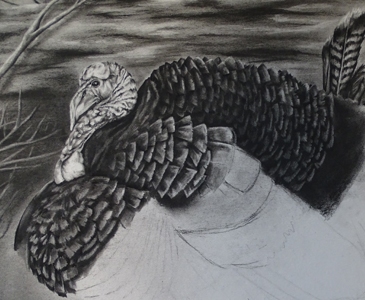 Still working on the turkey for the Maine Sportsman Show…will it be done in time???